My recent food dilemma has been what I should put the cashew butter on. The thought of it on bread is a little gross to me. I wanted something slightly sweet but tame enough to be breakfast-like and filling. Which made me think of Stefani’s Coffee Buttermilk Biscuits with Dark Chocolate Cinnamon Butter over at the Cupcake Project. I made these biscuits a while back and Rabin and I ate them nonstop until we felt vaguely nauseous but still wanted more. Instead of chocolate cinnamon butter, I used a mascarpone icing to top it because of a very scientific and technical reason – I had a lot of it in the fridge left over from a previous baking experiment.

The first time I made it, I followed the biscuit recipe exactly (steep the beans in butter! How genius!) but this time I wanted to finish it quickly because it was early evening and of course I left everything until the last minute and didn’t even start dinner and I was already hungry.

It’s hard to find snacks that aren’t granola bars, aren’t overly sweet, are healthy, and can be used for breakfast, and this is totally a keeper. In making this recipe, I decided to further healthify it a bit and switched out the all purpose flour for whole grain flour (with flaxseed).

Stefani’s recipe is pretty great as is, but you can check out my variation below.

Preheat oven to 400 °F. Stir sugar, flour, baking powder, baking soda and salt together in a bowl. Cut in the butter until the mixture resembles coarse crumbs. Add buttermilk & vanilla and stir until clumps form. Knead mixture briefly – about 30 seconds.

Transfer dough to floured counter and pat out until 1/2 to 3/4-inch thick. Use a round cookie cutter (I used a 2″) or shape of your choice and cut out dough. Place biscuits on a cookie sheet lined with foil or parchment paper. Bake for 12 minutes. Allow to cool and top with jam, jelly or butter of your choice. 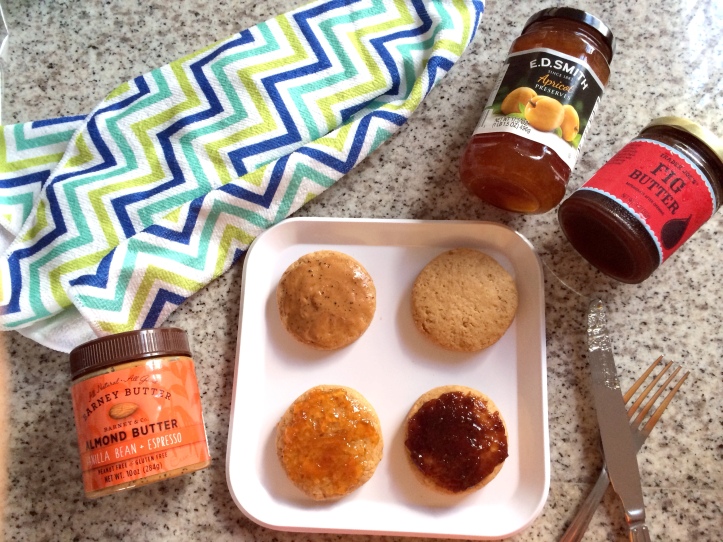 And yes. I know cashew butter isn’t pictured at all. It wasn’t because I was eating another biscuit loaded with it while I was taking these pictures… *averts eyes* *cough cough*

I’m bringing this to Angie’s Fiesta Friday Party as well.

So that’s it. I’m planning to whip up a batch of this on Sunday for the upcoming week and toss in some dark chocolate chips (That’s healthy, right?). I’m hoping that I can get my sh*t together this weekend and not stumble through another week like a drunk hobo. These biscuits are the first step! I hope.

Have a great weekend, and also where the H-E-Double Hockey Sticks did this year go? For those of you that made resolutions, how has your progress been? I made some exciting progress on my Food Resolutions. I’m totally gonna update my page next week. I promise.