I’m about to tell you something very controversial. I may lose a few friends and followers…but I have to say it: I don’t like Pumpkin Spice Lattes. *pause for gasps and indignant murmuring*

I just don’t get it. To me, the flavor lies more in it’s scent – you smell it more than you taste it. And the taste is like warm milk with spices. Also, warm milk grosses me out. And now it’s that time of year again where the Pumpkin spice craze is sweeping the food world (Pumpkin Spice Oreos? Really?).

What makes is worse is that because I’m a caffeine junkie, friends and family just assume that I love PSLs (Pumpkin Spice Lattes). A few years ago I was in New York in October so the ads were everywhere and every time my brother or husband bought a PSL, they’d ask me “want a sip?” until I had a minor meltdown in a random Starbucks along the lines of “NO, I do not EVER want a SIP of a PSL so STAAAHHHP ASKING!!” Now it’s a running joke and the Pumpkin Spice K-cups in my house are purposely left on the rack just for me. They’re so thoughtful. I do occasionally have my pumpkin revenge though – usually when it’s Rabin’s turn to get groceries, I write ‘pepitas’ instead of pumpkin seeds on the list and it gets him really confused in the supermarket *evil laughter*

The funny thing is, I don’t hate pumpkin or pumpkin type food though. I make a pretty great Pumpkin Mac & Cheese (excessive humility really is a flaw of mine) and I have more than one pumpkin bread / muffin recipe saved and ready to try. But there’s just something about that drink!

Anyways, to show that Pumpkin and I don’t have a beef (can I say that about a vegetable?), I’m sharing my warm weather twist on Pumpkin – A Pumpkin Seed Oil Vinaigrette. I saw this at Trader Joe’s a while back. I passed it on the shelf, picked it up, put it down and did a lap around the store. But I passed it again (man, taking a lap really screws you over) and decided that I didn’t want to regret not buying it when I had the chance.

I know what you’re going to say though. Vinaigrette again? Ah well, what can I say… I’m kind of in that phase right now. Also, I’m starting to think that trying out a vinaigrette is the first step to really becoming familiar with an oil. You have the opportunity to taste a milder version of the flavor and not be overwhelmed by the oiliness of it all. Even better, you get to pour it on neutral-ish tasting foods and see what works and what doesn’t. You’ll know that I recently tried out Avocado Oil and also Walnut oil, so I may be on the brink of a oil obsession – Oilsession? Does that work?

Instructions:
Whisk all ingredients together. Pour on prepared salad or vegetable of your choice. 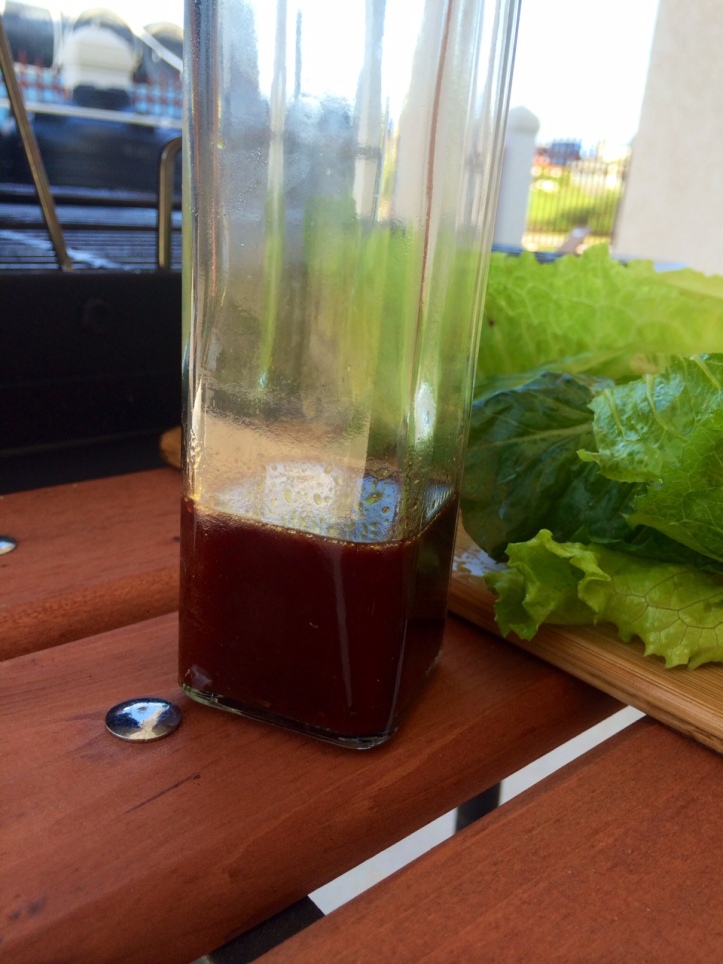 I have to say though that I’m pretty surprised at the colour of the oil. It’s a deep greenish so it surprises you a bit when you first pour it out, but I got over it pretty quickly. Thanks Trader Joe’s and suck it, PSLs. I’m quite happy with all the other variations of you! (Except pumpkin pie. That’s another story.)

Anyway have a great Friday and a great weekend!