Cambridge, Supermarket Addiction & the “I didn’t go to Brussels”…Sprouts

I had planned a Brussels visit toward the end of the trip. I was going to visit my brother in Cambridge and then hop on the train to Brussels for the day. But the London Rail is a thing to be reckoned with, and my super awesome planning skills clashed with a rail strike. Seriously, it started the day I arrived and finished the day I left. I did not feel like battling on the train for almost 2 hours to London, then possibly having my Brussels train delayed or cancelled. So I decided to save whatever little money I had left and go bankrupt in Cambridge instead of Brussels.

I spent about a week in Cambridge with my brother, chilling and catching up on some much needed sleep. We watched the entire “Burning Love” series, which was hilariously fantastic by the way, and a good portion of “the League”. Once again I failed to find “Its always Sunny in Philadelphia” very funny. For a genius, my brother keeps holding on to this irrational hope that I’ll find it hilarious and brilliant one day. I still hold out hope that Joey will leave Pacey for Dawson so we all have our impossible dreams.

We did go out quite a bit as well. Cambridge is everything you’d imagine a University town to be – collegiate, cultured, lots of cafes, old stone buildings, tree-lined walkways and grassy squares with groups of people lounging about and discussing something that will probably make me feel like Penny in the Big Bang Theory. I did just feel smarter being in the town. Those Cambridge people also live life on the edge – there is also the constant threat of being hit down by a cyclist. I cannot stress how many bicycles there are in this town. 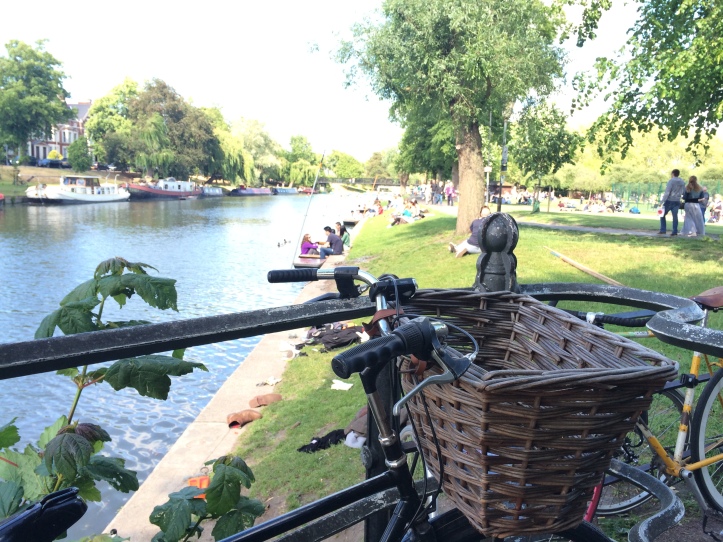 Apart from these near death experiences, we visited King’s Chapel, saw Kitchen Bridge where Stephen Hawking & Jane Wilde courted (and is most recently featured in the Theory of Everything), and saw the Cambridge version of the Bridge of Sighs, which apparently leads to exam rooms at the end of the semester. Ah, genius humour.

We also went punting on the River Cam, which is a classic and cool Cambridge experience. Tourists, parents, friends, (we even saw a wedding party!) get to sit quite comfortably in a little boat and travel down the river with guides using only their sense of balance and a long stick to navigate. It’s quite entertaining to see people that are not guides choose to navigate – let’s call it an aquatic version of bumper cars.

Generally, my brother tends to describe (apparently) odd things that I do as very “Indi”. So staying home one morning to wait for an Amazon delivery of the best cookies I have ever tasted in my life? Very Indi (and very worth it!). Geocaching? Indi. Listen to a guy performing in the square then finding him on Facebook to see if he has an album out? Indi. Leaving me for a second in the liquor aisle and coming back to find me in the same aisle with two new dinner plates in my basket? Indi. Going to a different supermarket to browse every single day? VERY Indi. One day we went twice. Don’t blame me. Blame my parents and grandparents. And ok, blame me a little. But I mean seriously, how can one resist the nearby Farmer’s Market, Tesco, Waitrose, Sainsbury’s and Marks & Spencer? If I lived there I’d probably never spend my money on anything else.

Another “very Indi” thing is that when I travel, I get the urge to cook and try different ingredients that you wouldn’t normally get in Guyana (or is super expensive). I love restaurants, don’t get me wrong, and we went to our share of those, but I love the feeling of inspiration I inevitably get whenever I’m in the supermarket. It’s like crack to me. I pick up all these weird combos of stuff and can’t wait to go home and make it or eat it. How can you resist the impossibly cute vegetables in the produce aisle? I listened when the baby Brussels sprouts called out to me. Then I listened again when the cherries, zucchini, mushrooms, cherry tomatoes and 3 types of lettuce greens called out to me as well. You can call me the Vegetable Whisperer. I don’t mind.

We generally ate at home in the mornings, a wonderful combo of fruits and veggies and hummus – a tub of which was somehow destroyed by yours truly in less than a week. Coffee was made by my brother in a cafetière (what a showoff). We usually ate out at lunch and dinner was either me cooking, or a guilty purchase, knowing that we had leftovers in the fridge. Our greatest triumph was ordering food online while we were out and having it arrive literally 5 minutes after we got home. These are honestly the little joys that I live for.

One night we decided to make dinner and clear out the remaining untouched veggies (basically brussels sprouts) in the fridge, partially because I wanted to cook, and also because nothing else could really fit in the fridge. I admit, I have made this dish for breakfast in the past, and it actually works as the first meal of the day. Have the Brussels sprouts with scrambled eggs and you’re good to good for the morning. It’s an incredibly simple recipe that I came up with a while back. I don’t know why people say that brussels sprouts are disgusting. I’ve never come across a green vegetable that I didn’t like except okra, but come on – the okra fan club is pretty small isn’t it?

This is also a really simple side dish and is very low maintenance. You want the sprouts to get a little burned. It gives it that charred, BBQ-y vibe without too much effort.

I didnt go to Brussels...Sprouts

Cut Brussels sprouts in half lengthways. If using regular sized sprouts, cut into quarters. Warm Olive oil in a skillet, and swirl the pan around to make sure the oil is somewhat evenly distributed. Place Brussels spouts cut side down and season with 1/4 tsp salt & 1/4 tsp black pepper. Cover and let cook on medium heat for one minute. Remove cover and let cook for another minute.

Stir sprouts (you do not need to keep it facedown at this point), season with remaining salt & pepper and let char for another minute or two. Keep a close watch to make sure sprouts do not char beyond your desired texture. Add cheese to skillet, stir to distribute evenly. Let cook for another minute until sprouts are crispy and cheese bits are melted.

In summary: Cambridge is great. The intricate history of each building, the collegiate rivalries, the eclectic combination of students, distinguished professors and parents glowing with pride fills the air with a calm frenzy and makes you ask yourself on more than one occasion – “London Who?”