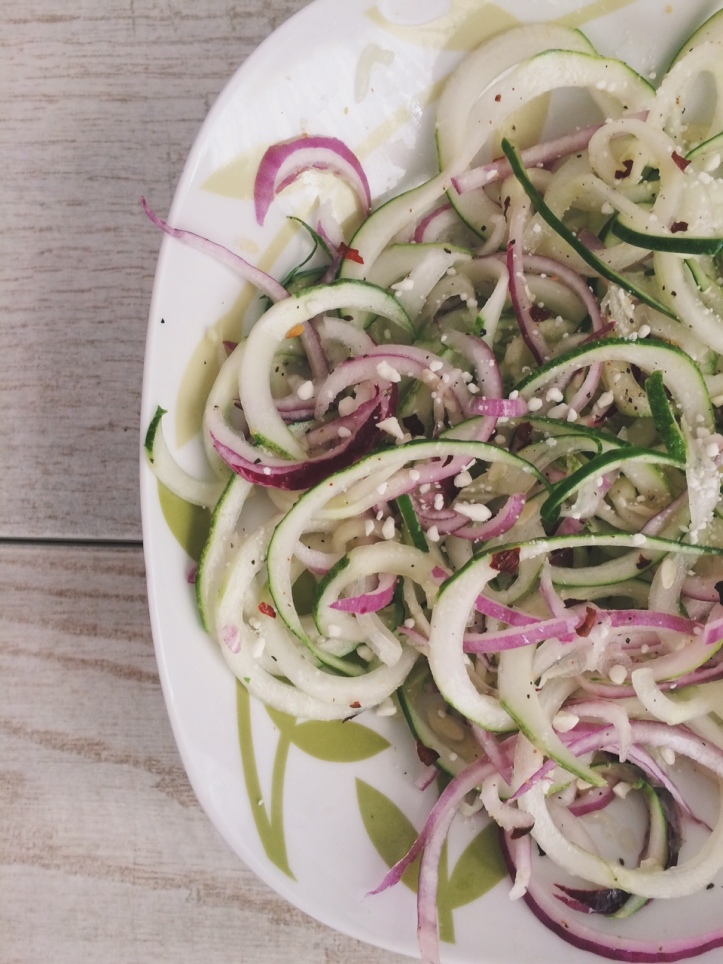 I recently got the newest and most popular kitchen gadget on the market nowadays – a Spiralizer. I mean I can’t tell you what’s trendy in the world of fashion or beauty (or if the word ‘trendy’ is even trendy anymore), but ask me what vegetables are “in” and I’m your girl. The concept of a spiralizer intrigued me because it was marketed as a tool to help you replace pasta in your diet – you could take zucchini and carrots and similar vegetables and cut it into twisty, swirly strands, giving the visual and even textural appearance of spaghetti. You add your sauce and you apparently wouldn’t even know the difference! As a die hard pasta fan, I was curious. Plus, when I checked out the types of vegetables you could convert into spirals, I was sold. Potatoes = curly fries! Onions = Onion rings! Cucumbers = a cooler way to eat cucumbers because slices are boring!

To be perfectly honest, I haven’t even attempted to eat Zoodles (the super trendy name for zucchini noodles – told you I’m your girl) with spaghetti toppings – sauce, mushrooms and a buttload of cheese. I’ve been sauteeing the zoodles in garlic and a little seasoning and it was great. I forgot to take pictures of it actually. I love my spiralizer and as Rab said – it somehow tastes better when all curly. The fact that they’re so popular just attests to the fact that we really do eat with our eyes first.

Today’s recipe is a simple spiralized cucumber salad, which is also just as awesome to turn into swirls. I’m notorious for letting cucumbers go bad because for some reason I consider them to be an “afterthought” vegetable. I rarely seem to plan a meal that involves cucumbers, so the simple fact that we’ve had cucumbers more than once in the last two weeks means that it’s either a truly great kitchen gadget, or I haven’t bought many other vegetables lately. Or both.

Cut the ends off of the cucumber and spiralize according to product instructions. Spiralize your onions too! Toss both with lemon juice, peppers and salt. Top with feta right before serving.

Note: This keeps well in the fridge for a day or two as the flavours have a bit of time to mingle. 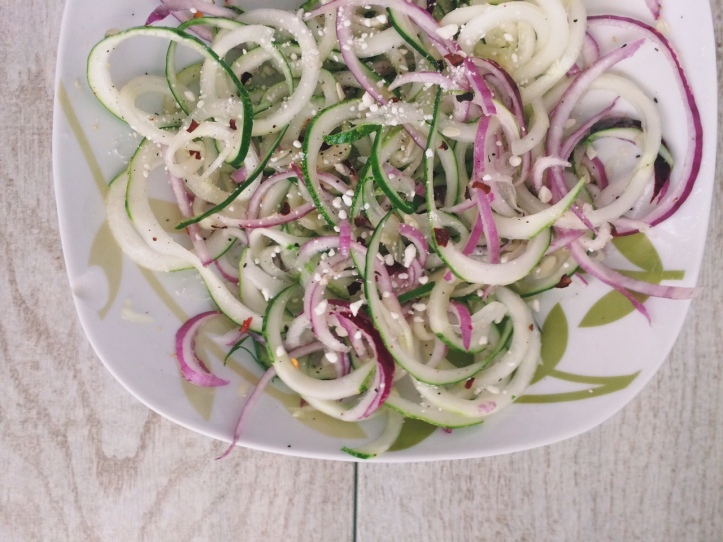 Watching: The amazing trailers that have been released recently. Gilmore Girls: a Year in the Life now has a release date (November 25!!!!), the Justice League and Wonder Woman trailers look fantastic, I also loved the new Ghostbusters and all of its callbacks to the original movie, which I personally thought was not all that great. Hate on me, nerds. I stand by my opinion.

Reading: Does it even matter? I’m just killing time because WE ARE SO CLOSE TO THE RELEASE OF HARRY POTTER AND THE CURSED CHILD! I’ve been scrolling quickly past the headlines of the reviews of the play, because I absolutely totally do not want to accidentally spoil it for myself, which I actually have done in the past. I’ve also decided that I’ll be doing a complete social media blackout once the book is released until I’ve finished it. So bye in advance! We actually played around with a few Butterbeer type cocktails in February for our Cabana Cocktail, so I’ll probably share the recipe with you so that you can get happy on HP joy and appropriately themed liquor.

Listening: ‘Animals’ by Travis. What I love is that this song feels like it gets straight to the point. Like it’s saying “ok so we all know you love our older music, so let us take you back…”. it feels like it could just be a continuation of ‘Driftwood’ or ‘Closer’, which is definitely not a bad thing.